Rigorous scientific research on botulinum toxin began at the end of the 20th century. At first, it was only found that when botulinum toxin type A was injected into the glabella, migraine headaches were relieved, so it was approved by the Food and Drug Administration (FDA) as a neurology drug. Since then, it has been found that as long as the dose and injection site are properly controlled, botulinum toxin has many, many uses, such as pain caused by various nerve paresthesias, hyperhidrosis caused by abnormal nerve regulation, and appearance. Muscle hypertrophy, wrinkles caused by excessive muscle involvement, etc., can be effectively improved. The latter two are the topics we are going to discuss today - Botox for face reduction and Botox for wrinkle reduction.

In Eastern aesthetics, women's faces are mostly soft and bea 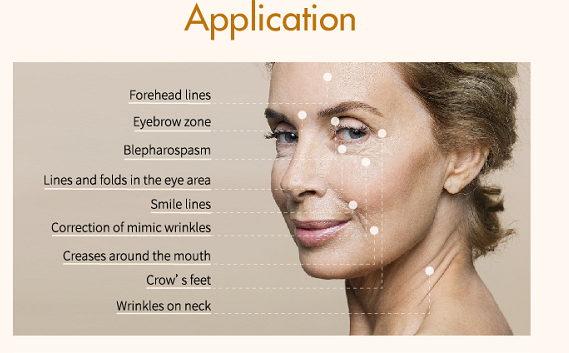 utiful, and people prefer an oval face to a tough square face. Although the most important factor affecting whether the face is square or round is the mandible, but each of our bilateral mandibular angles has a chewing muscle, called "masseter muscle". If these two muscles are too developed, the human face will also be shaped. Appears to be relatively square. Therefore, the masseter muscle is also an important factor affecting the face shape.

Another most common application is wrinkle removal. There are well-developed expressive muscles on our faces, which are our powerful tools for conveying subtle moods, but too rich expressions will also bring rich expression lines:

When we raise our eyebrows to express doubt, horizontal forehead lines may appear;

When we frown worriedly, vertical and deep "Chuan" lines may appear between the eyebrows;

When we laugh happily, radial crow's feet may appear at the corners of our eyes.

As a living being, people need facial expressions to express their emotions, but due to the primitive rejection of aging and death by human beings, whether in the East or the West, people do not like wrinkles and will try to get rid of them.

Botox is a magical tool that can achieve "only expressions without expression lines". When the injection site and dose are properly controlled, the improvement of expression lines will be seen 3 days after injection.

Although botulinum toxin is widely used and effective, it always has a disturbing smell to people who have not been exposed to it before: after all, the name is "toxin", is it really safe?

Botulinum toxin is a neurotoxin. 1 gram of botulinum toxin type A can kill millions of people by paralyzing the respiratory muscles. It has the potential to be used as a biological and chemical weapon. However, the botulinum toxin injected for medical and medical cosmetic purposes is diluted and purified by 100,000 times. Normal treatment can only cause a little muscle relaxation effect in the local area of injection, and cannot affect the muscles of the whole body. From the results of animal experiments, it is speculated that a person weighing 70 kg needs to take at least 30 bottles of 100 U of botulinum toxin in one breath to face the risk of death, and most treatments may require less than one bottle of 100 U in a single dose. Botox. So, poisoning is not possible.

So, will Botox injections cause facial stiffness? In the early 2000s, when Botox was just beginning to be used for wrinkle reduction in the first decade, we heard rumors of many celebrities getting stiff facial expressions after Botox injections, some of them admitting it was because of Botox injections. Therefore, facial stiffness may indeed occur, but whether it occurs is mainly related to the level of the doctor.